Resistance is Futile - unless you get there early enough. 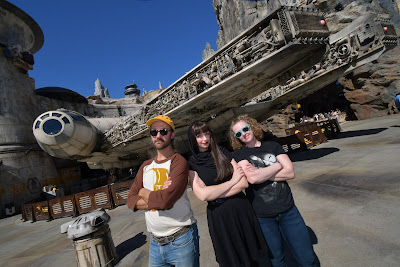 My dear friends Tara and Mariah came to town for a mom getaway and I fully crashed the party.  We had a blast.  I love these two humans the most.  Also, finding keto-friendly food at Disneyland - not that hard.  Avoiding eating all the treats at Disneyland, especially with your best treat friends - very very hard.

"Wahoo!!!" - everyone at approximately 9:00:30 in the morning when they were rewarded for their diligence with a boarding group for Rise of the Resistance. It was funny to hear.  (Also, we definitely got a boarding group - 45.)

And just like that, February is over.  Saw this today, and it made me laugh: 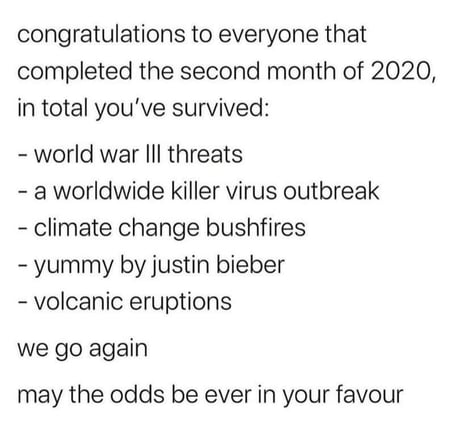 What a year it's been already.
Is everyone gearing up and ready for the primary on Tuesday?  I know for many of you it's a foregone conclusion as the Republican candidate is essentially already decided (Heaven help us all).  But for those of us on the right side of history 😜, we've got quite a competition happening.  I'm interested to see how things shake down after Super Tuesday - especially now that ol' Mayor Pete has dropped out of the race.  Lots of love coming to everyone from your favorite left-leaning, feminist, gay artist. (That's me!)

In other news, I went down to Disneyland once a week in February!  It was bonkers!  And so much fun.  The new Star Wars ride is one of the coolest rides I've ever been on and I'm excited to go back!  Also, I just love being there.


I realize the recent changes to BYU's honor code may not be on everyone's radar, but there's been celebration and pearl-clutching in equal measure.  The changes affect my people, so I've been keeping a casual eye on the happenings.  I thought this was a really interesting take on it, and he shares some thoughts I've been having for quite some time.  It seems that in the church, and especially in the culture of the church, the important things often get pushed to the back-burner because they're not visible.  I hope we can all bring them to the forefront a little more.

This one was hard to watch.  Beautifully done piece of cinema, though.
I don't generally follow awards season stuff because I think it's all a bit of a joke, however, now that I've seen it, I don't understand why the lead actor wasn't nominated for anything.  He was incredible.
Posted by Greg D at 5:41 PM