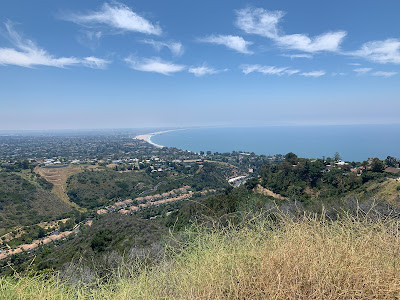 Went for a hike on Friday and this is the view from about halfway along the trail.  Despite that lovely layer of haze, the view was pretty stunning.  It was nice to get out into some fresh air and take a breather from EVERYTHING that is happening in the world right now.  #rechargetofightthegoodfight
What's going on?
What.  A.  Week.  It's been a week of lots of reading and questioning and digging into reputable sources and listening and watching documentaries and hearing stories and learning how to approach conversations from a place of curiosity as opposed to combat and checking my knee-jerk reactions and clarifying my beliefs.  Y'all, we have a lot of work to do.  I know half of you are rolling your eyes while reading this, but here's the thing - you understand the position.  When something is important to you, when you believe in its value to society at large, you share it.  I've been doing my best to confront attitudes, fragility, privileges in my own life and figuring out how to leverage my position to help lift those around me who don't enjoy what I do.  There are better ways to do things.  We have to keep fighting - as humans, as brothers and sisters, as children of God - for equity and love.  Ya know?
I compiled this lovely list of statistics last weekend because I'd heard and seen a lot of numbers flying around and got curious about what the actual story was behind it all.  Interesting stuff!
I was having a conversation with a friend this week who is studying - as part of research for his Master's Degree - what conservatives believe and why, and he said, "Conservative political ideology is largely just opposition to liberalism." Which I found interesting.  Obviously that's not something that applies to each individual #notallconservatives, but I do think it speaks to the general direction of that side of the political spectrum in an interesting way.  He also said that on the more progressive side, you don't find the same thing.  Progressives generally have a clear articulation of beliefs.  Something to think about.
I made myself a spreadsheet/calendar this week for 365 days of action.  I want to be more involved in shaping the future of the country, even in small ways.  Anything from reading a book with a perspective I haven't explored yet, to watching a movie with a diverse cast or unfamiliar viewpoint, to signing petitions and emailing government leaders and marching in parades: 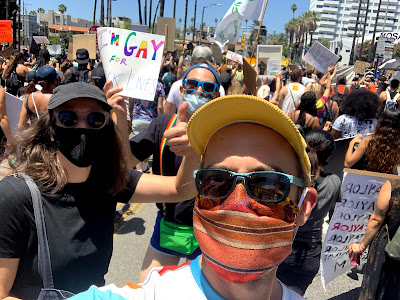 (There were SO MANY PEOPLE at this march. Maintaining social distance was essentially impossible, but everyone was wearing a mask and there were so many people along the route handing out hand sanitizer.  It was pretty great.)
Also, I got some killer Chicago-style deep dish pizza this week.
What I'm watching
Lots this week...

Some unbelievable acting from Ms. Kerry Washington in this one.  It's a play adapted for film and explores questions of race in a very layered way.

This show is not for everyone, but if you don't mind a little "content", it's great.

They're back!  More ugly-cry-worthy makeovers.  I think the first episode of this season was especially impactful.  Please watch it.  It showcases so beautifully the power of an institutional apology.
And just for kicks and giggles:

This is a documentary from 2007 that explores the intersection of faith and being LGBT and I think it brings up some beautiful things and showcases some ugly things and there are things in here that I think everyone can learn from and grow from without changing any of your core beliefs about the nature of God.
What I'm reading

This is a perfect follow-up to "White Fragility".  It's a 28-day workbook for, as it says on the cover, combating racism, changing the world, and becoming a good ancestor.  Get it.  But it'll probably be a sec because everywhere is on back order and all the libraries have a weeks-long hold list.
What I'm listening to

I thought this week's episode featuring a former DOJ official and his thoughts on the criminal justice system was an especially interesting take on what's going on in movements across the country re: policing.  Just to put my own thoughts out there, I believe in the idea of defunding police.  That doesn't necessarily mean abolishing the police, rather reallocating funds to better-equipped professionals.  i.e. police handle so many things they don't need to and aren't equipped to: mental health, social work, education etc. So let's spend money on those services - which are all proven to reduce crime - and stop putting that in the hands of people who are under-trained and carrying guns. Also, can we please demilitarize the police?  It's absurd.
What I'm cooking

Roasted beet salad.  I actually just used this recipe as a starting point.  I got some beets in my produce box this week a day after I bought beets at the farmer's market, so I had a lot of beets to use.  I sauteed the beets, put them on some red lettuce, added goat cheese crumbles, blue cheese dressing, sunflower seeds, and fresh cherries.  It was bomb.
And that's it from your friendly leftist friend/family member for this week.  Love you all! ;)