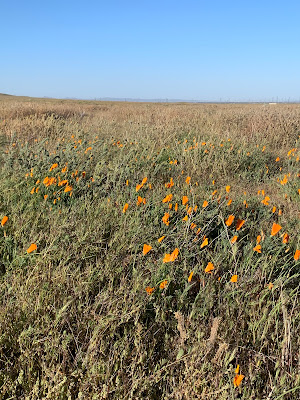 California's famous poppy super bloom is happening right now!  I drove up to see them for myself.  It's the end of the bloom season, and many of the weeds have grown pretty tall, and the actual poppy reserve is closed, and it was VERY windy the day I went so the poppies were closed (they don't do well in the wind), so it was less-than-overwhelming, but I could see how it would be quite breathtaking.  It was still a really nice drive up through the mountains.

Happy Mothers Day to all the moms!  This year I am especially grateful for the incredible women in my life who continue to support, love, and inspire me.  I firmly believe it takes a village to raise a child.  A couple of years ago I went to see some Shakespeare in the Park here in LA.  Halfway through the show, the power went out and the stage went dark.  The actors bravely soldiered on in the darkness.  Suddenly everyone in the audience started pulling out their phones and turning on their flashlights.  Each light on its own didn't do much to help, but the combination of hundreds of lights was enough to light up the stage.  It was a beautiful and moving moment. My mom's bright influence on my life is obviously immeasurable, but so are the influences of each smaller point of light - especially since my mom is gone.  So many women continue to light up my life and help make me a better person. Thanks and love to all of you.

The news around Ahmaud Aubrey's shooting.  I know a lot of people who roll their eyes at every mention of racism in America, as if it doesn't exist.  And while overtly racist actions are certainly rarer than they used to be, systemic and institutional racism - subconscious though they may be - are still rampant.  This is a perfect example.  If two black men had shot a white jogger in their neighborhood for these same reasons, they would have been arrested almost immediately.  It took four months to arrest these men and it only happened after concerted social media pressure.  Likewise, if a bunch of black people had occupied state capitols carrying guns, white people would be clutching their pearls and crying foul.  Y'all, I just want my friends to feel as safe.  We've got work to do.  You can start by going here to learn about your own implicit bias, and how it subconsciously affects how you view and interact with people.  It's pretty eye-opening.  Also, read my book rec from last week: The Warmth of Other Suns.


All of these articles about the Plandemic "documentary".  It is saddening and frightening how many people I know who are giving credence to a baseless conspiracy theory.  The virus is real, and it is dangerous.  Stay home.  Wash your hands. This is a fun one!  It's called "Authorful puns" and contains such gems as 'Putting Out Fires' by Rex Stinguish, and 'How to Get Groovy' by Buster Moove.  It's apparently out of stock everywhere, so you may have to wait if you want to get this one for yourself.