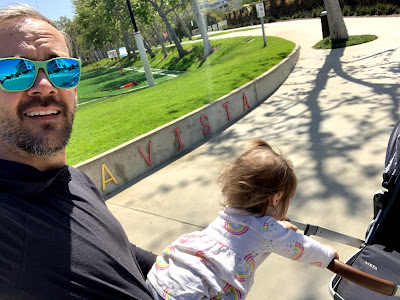 Babysitting.  The little tyke INSISTED on pushing the stroller.  So.
What's going on?
Pretty chill week this week.  Not much to report.  A little tutoring, a little babysitting, too many donuts.  I went over to a friend's house yesterday to watch some TV (we have a couple of shows we're watching together) and between the shows we watch and a couple of movies (we got sucked into Avengers: Infinity War AND Avengers: Endgame) we ended up watching, like, 9 hours of content.  It's been a long time since I've done that.  To make up for it, I took my paddle board out this morning and the weather was PERFECT.
What I'm watching 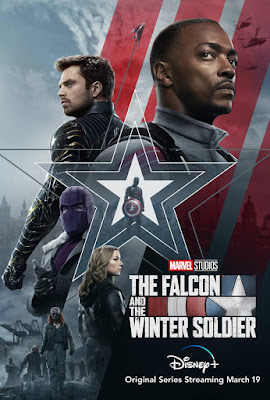 Marvel's at it again.  This series is...fine.
What I'm reading 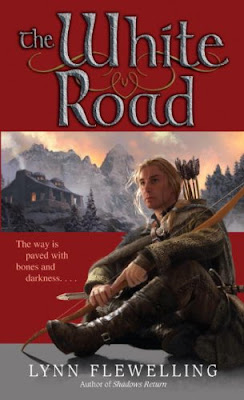 Book 5!  I started reading The Millionaire Next Door, but just wanted to continue with this series, so here we are.
Posted by Greg D at 5:28 PM No comments: 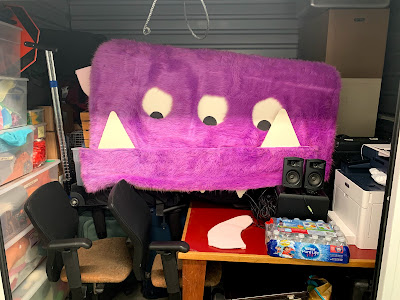 This is Polly.  She's a giant Story Pirates puppet that now lives in a storage unit because the theater where our office was located shut down (yay Covid!) and so we had to move our stuff into storage this week. Polly, I think, is angry that her horns fell off during the move.  And also angry that she has to live in a storage unit.
What's going on?
Busy week!  This is probably the busiest week I've had in over a year.  It was nice.  Along with coordinating and executing the Story Pirates move, I did some babysitting, directed a Story Pirates show for a school specializing in students with Cerebral Palsy, hosted a volunteer event with Story Pirates with people from all over the world (we had attendees in India, Japan, Mexico, Australia, and the US), pretended to have a collapsed lung for 2nd year medical students for 3 days, tutored, and let some PA students jiggle my bits for science.  I also managed to get in some jogging, cycling, reading, TV, a hot bath, and sleep!
It almost feels like life is back to normal.  Except for the part where I can't hang out with my friends in large groups, or go to the grocery store without a mask.  Seems like more and more people are getting vaccinated though, which is encouraging.  Plus Disneyland just announced that they're officially opening back up on April 30.  It'll be at limited capacity, and at least for the moment it's only open to California residents, but being a California resident, that's great for me!  I'm not gonna be one of those ultra-dedicated people who have to have a ticket to opening day, but I'll probably try and go sometime before the summer's over.
What I'm watching 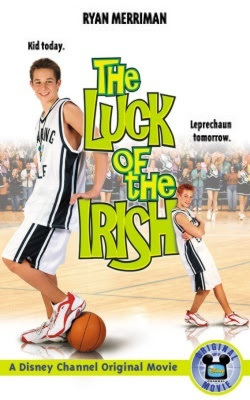 In honor of St. Patrick's Day we decided to bust out this old chestnut.  What a treat.  It's truly a terrible movie, but still fun to watch.  And it was largely filmed in Utah!  Hooray for tax breaks!
What I'm reading 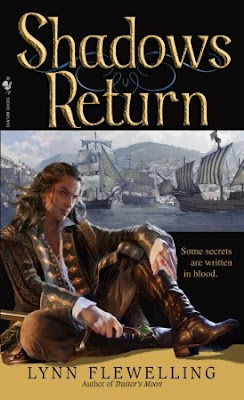 Book 4!  Let's go!  This series still isn't as compelling as other fantasy series out there, but it's engaging enough to keep going.  There are plenty of fun, likable characters, and the storylines are interesting. Plus I'm invested now.  :)
Posted by Greg D at 1:26 PM No comments:

When you wish upon a star... 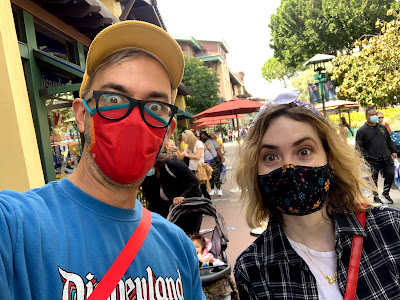 It's been over a year since I've been down to Disney, and so since I'm vaccinated, a Disney-loving friend of mine (who is also vaccinated) and I decided to head down to enjoy some treats and shopping and magic.  It was a delightful day.  And as you can see, they're keeping the magic alive by making you stand in line!
What's going on?
WAFFLES!
And LIFE!  Work is picking up a bit at the moment, which is fun.  It's keeping me busy.  Along with my standing weekly nanny gig, my old boss at Kidville is having me come watch her kids for a couple of hours a week - which mostly consists of me putting her youngest in a stroller, where she almost immediately falls asleep, walking to the park and reading for a couple of hours, and then going home.  It's chill.  :)
Story Pirates gigs have been picking up a bit too.  I've done a couple of virtual birthday parties recently, which is kind of a new thing for us.  We used to do birthday party shows a few years ago, but we stopped, and now in this virtual landscape, they make more sense, so we're giving them a whirl, and they're going well.  I'm back to directing shows, which is really fun.  It's where I feel most in my element with the company and I'm glad to be back in the saddle that way.
This week has also included plenty of puzzling, reading, TV, movies, and bike rides along the beach.
What I'm watching 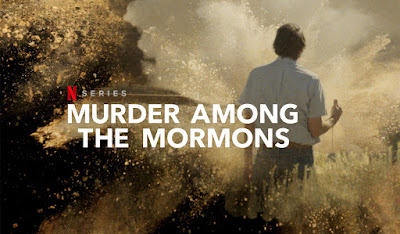 Y'all, this was bananas.  I know a lot of people in Utah are familiar with this story, but I was only 2 when it happened and wouldn't live in Utah for another 4 years, so I had no context and it was fascinating to watch.
What I'm reading 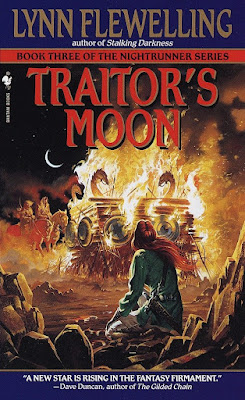 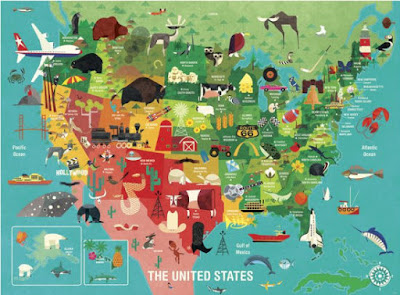 The United States 1,000-piece puzzle by Mudpuppy. This one was really fun.  I borrowed it from a friend, but I'm tempted to tell them I lost it and then just keep it.
What I'm cooking 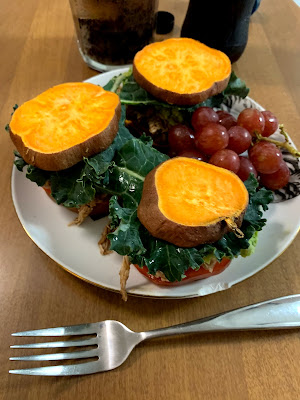 Sweet potato sliders.  As with a regular slider, you can basically put anything on these.  You just use roasted or grilled sweet potato slices as the bun.  Mine included chicken mole, tomato, guacamole, and kale.  They were delicious.
Posted by Greg D at 12:08 PM No comments: 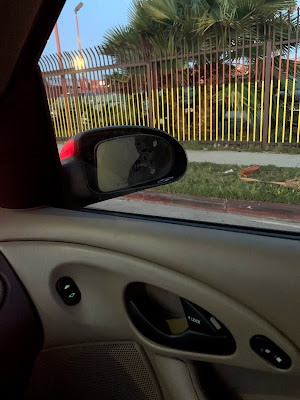 I'm not 100% sure, but I think a garbage can attacked my mirror.  RIP.
What's going on?
I'm getting older.  I mean, we all are, but the evidence has strengthened this week.  I had my yearly checkup and my cholesterol was a little high.  Not higher than normal (for me), but borderline high for the general population.  That combined with a family history of high cholesterol and blood pressure, and other various heart problems means my doc wants me on cholesterol meds.  So.  Here we are.  I was really proud of the fact that I'm in my late 30's and not taking any medications.  But such is life.  Genetics will out, I suppose.
I've picked up another consistent childcare gig.  My old boss from Kidville is having me watch her young'ns for a couple of hours a week so she can have a moment of sanity.  So far it's been a pretty cushy gig.  Her older one is in school, so I go pick up the younger one in her stroller and by the time we get to the park, she's asleep.  She sleeps basically until it's time to go back home and drop her off and I'm on my merry way.  Good way to get a bunch of reading done. :)
Work is starting to pick up a little in general as well.  Babysitting/nannying, tutoring, Story Pirates, Standardized Patient work, teaching improv to kids.  It's fun.  Keeping me busy, but not so busy that I don't have time to enjoy some TV or the occasional hike.
What I'm watching 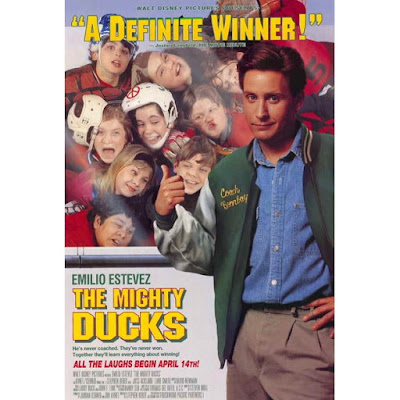 Did a movie night with some friends and watched this old gem.  Man, 90's underdog sports movies are a TRIP.  And you really can't go wrong with a dreamy young Emilio Estevez.  Thanks, Disney+!  Now if you'd kindly add North Avenue Irregulars to your offerings, I'd be much obliged.
What I'm reading 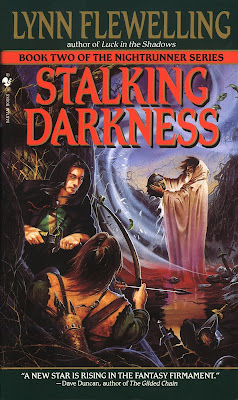 Book 2 in this series.  This one gets a bit saucier.  It's not as imaginative or inventive as other fantasy series, but it's still engaging enough to keep me going.
Posted by Greg D at 6:17 PM No comments: