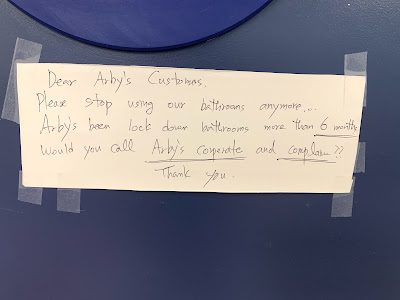 Stopped for lunch in Barstow and the Arby's was only open for drive-through orders, so I had to go to the gas station next door to use the bathroom.  This was on the bathroom door and made me laugh.
What's going on?
Happy Labor Day!!!  I was going to go hiking, but when I arrived at the trail head a somewhat surly park ranger informed me that all of the trails in the area were closed due to the heat (it was, like, 80 degrees that day, but had been in the triple digits over the weekend).  Any other hike would have been at least an hour drive away and not guaranteed to be open, so I went home and washed my car instead.
Not much else going on this week.  Work, farmer's market, getting back into an exercise routine, etc. I drove to Utah this weekend for a niece's baptism and had a grand old time.  It was really nice to get out of LA since the entire west coast is currently under a dark cloud of ash and smoke.  Not looking forward to driving back into that.  Looks like it should clear up a bit by Wednesday, though.
I got my hair cut while in Utah. (Thanks Brianna!).  My hair's been growing out for about a year and a half and it just felt like time to go short again.  Changes all around.
What I'm watching 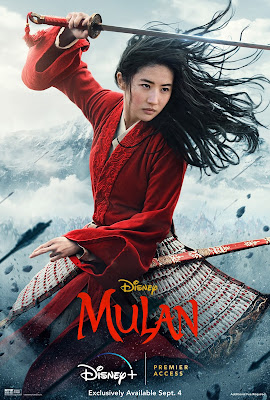 Apparently there's some controversy around this one. The lead actress, Liu Yifei, apparently supports police brutality and oppression in Hong Kong.  Part of the film was also filmed in the region of China where the government is detaining and oppressing ethnic Muslims.  So, not great PR for this film.  But I watched it before I knew all of that.  I've heard some mixed things about the movie, but overall I really enjoyed it.
What I'm reading 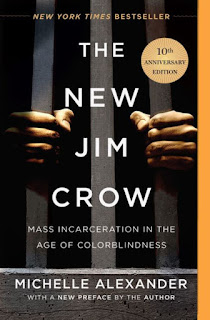 A look at mass incarceration in America.  It seems like if you read this and aren't completely infuriated, you need to check yourself and read it again.
Also saw this gem on Facebook and thought it was quite thought-provoking:
My kids are watching "Les Miserables" tonight and I can't help but think there are a lot of people who love this story and would absolutely hate everything about it if it were set in modern day.
A convict imprisoned for minor theft highlights the plight of the poor and the inequities of the justice system. A single-minded police officer whose insistence on the letter of the law creates injustice.
An impoverished woman whose #metoo moment ends with her disbelieved, cast away from society, further impoverished and forced into prostitution, where she is taken advantage of and ultimately wrung out until dead by upper class johns and the justice system.
These injustices lead to an ultimately failed riot by young people, that is nevertheless held up as an exemplar of the Kingdom of God that is coming.
Even the minor villains are small business owners who are working hard to achieve riches at the expense of the people around them.
And in all of this, the heroes, the only people who provide any help to one another:
* An ex-convict on the run from the law
* a lying churchman who extends grace
* a young rioter
* a prostitute and her child
* a homeless child (also murdered by state violence)
All of this in an unapologetically spiritual, inherently Christian story in which every prayer is answered save one: Javert's prayer that the convict be placed behind bars again.
And the thief is not transformed by prison, which makes him only more desperate, more dangerous. He is not transformed by justice. He becomes a better man, a functioning part of society because of mercy, and because he is invited into the community of faith. Love, faith, kindness, mercy. Justice and rule of law bring only injustice and death in this story.
I wonder in that world if each of us would be cast in the role of villain or hero. Food for thought.
Posted by Greg D at 7:32 PM