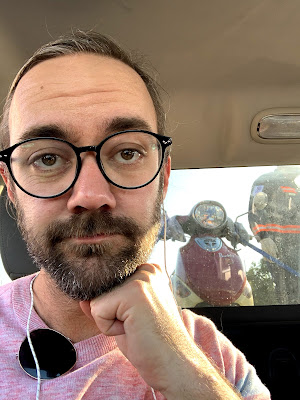 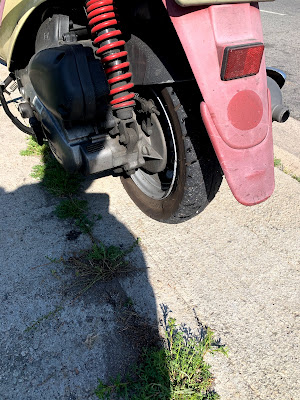 Yup.  Phin got a flat.  Luckily it was basically just at a stop light and then it felt weird when I started driving again rather than blowing out going high speed around a turn - which is something that terrifies me.  After waiting for a two truck, getting him into the shop and getting a Lyft home, it ended up being a 3-hour endeavor.  BUT Phin is back in fighting shape.  Though who knows for how long.  My mechanic said he thinks Phin may not be long for this world and that I just to pay especially careful attention to oil levels.  When I bought Phin, they said scooters usually last about 40,000 miles and he's at about 62,000, so I think that's pretty good.  My mechanic said he wants to keep Phin on the road as long as possible and he'll do what he can.  So we'll see.

"I was going to say the Coronavirus"
- A kid at a Story Pirates show letting us know what he thought the pineapple named Pineapple should have been afraid of instead of people.

I went to the doctor on Monday since I now have insurance and an annual checkup is free.  I'm in pretty good health, so there wasn't much to talk about.  He did a little blood work and I'm going back in a couple of weeks to talk all of that over with him.

I talked to a guy about a potential new job this week.  I know.  I already have plenty, but this is basically an extension of my job as a Standardized Patient, it's just with a different company because it's more invasive stuff - testicular exams and rectal exams and the like.  And I'm all, "Whatever!  It pays so well!" So that'll probably be happening.

Big news this week - I started the Keto diet.  I've been thinking about it for a while, but decided to finally take the plunge.  I'm not generally very good at following through on stuff like this, but I've actually stuck to it this week!  And it's not so bad.  I mean, the diet is basically eat a bunch of meat and cheese and cream and butter, so it's comfort food city.  And there are so many keto-friendly treat recipes out there that though it's not quite like having a warm, gooey, chocolate chip cookie, it's close enough that I can do this diet for a couple of months.  I'll let you know how it goes!


Even though I think the name of this website is problematic, this Instant Pot chicken tikka masala was so good.  If you don't have an instant pot, that's okay.  You can just do it in a slow cooker.


I thought this episode of Hidden Brain was interesting.  It talks about the idea that the people who are more "political" often treat it as more of a hobby than actually being involved in political change.  Get out there and vote, y'all!
Posted by Greg D at 9:27 PM