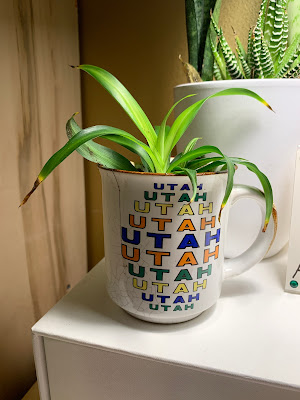 Newest member of my growing plant family.  A friend was getting rid of this awesome mug and gave it to me with a little baby spider plant in it! Way cute!


Quote of the Week

- 11-yr-old girl sitting behind me on the plane in response to discovering that the iPad may have been left at home.  I'm not used to fake swearing and it made me laugh.

What a week!  I flew home from Utah on Monday and basically immediately became the busiest human.  Kidville, tutoring, Story Pirates, birthday parties, dinner with friends, resisting the urge to spend money at Downtown Disney.  The struggle is real.

At Kidville we have a small boutique in our lobby where we've typically sold Melissa & Doug toys and books and the like.  We've recently decided to start selling party supplies instead as we do birthday parties on the weekends.  We're stocking a bunch of stuff from Meri Meri and it is honestly all the most adorable stuff that has ever been created.  My manager and I spent several hours hand-writing prices on a bunch of stuff and I'm not even mad about it.  Mostly because I love my manager and we get along great. Anyway, if any of the 17 of you who read this buy any of their stuff I hope they give me a commission.  Or at least a free robot toy.

I'm deep into uploading photos to the cloud.  I tackled a bunch of photo CDs from my time at Hale Theater and it made me rather nostalgic for that place.  I really had a lot of fun there.  Also, I was hanging out with a dear Hale friend this weekend and she posted some video or something to Instagram of us and someone commented on it and said, "Is that the Man in the Chair from Hale?!" and I guess what I'm saying is I'll never do anything as good as that show and I peaked at 27 and it's a heavy burden to bear, ya know?  So now I'll go back to making fart noises for kids and be content.

This article was rather interesting.  And many, if not most, if not all of the women in my life can relate and have some interesting and depressing stories about it.

More Dark Crystal!  I want it to never end!!!