So Neil Patrick Harris is my boss, right?  (Sorry to keep mentioning that.  I know it's super name-droppy and ridiculous, but as a friend of mine said, "I work for a lady named Laura, and that's not nearly as cool.")

He's producing the Haunted Play that I'm performing in.  This attraction is hard to describe to people.  It's different than a traditional haunted house because there's a plot, and the audience is involved in the story.  But it's not a really a play because it takes place in an old mansion: 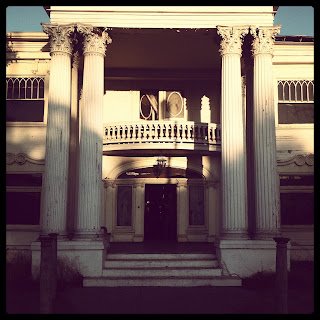 ...Anyway...It's super cool.  Neil has been through it a couple of times and even though he's kind of one of the gang at this point, it's always a tad jarring to be all up in my expositiony schpeel and suddenly see NPH's face. (It's dark in my part of the house - which is that window on the upper left of the picture - so I can't really see people very well until I'm right in front of them)  Yesterday I missed out on Michael Cera - which may be for the best.  Jarring experiences like that tend to make me forget my lines.

All celebrity aside, the show has been really fun.  It takes about 40 minutes for people to get through the house and a group starts the tour about every 15 minutes.  It's not a very "jumpy" haunted attraction, though there are certainly jumpy moments, it's more just terrifying.  I don't really want to give anything away, just know that yesterday a woman literally left in tears.  The day before a man had to crawl from one room to another because he lost the use of his legs.  Last week I heard that someone actually wet themselves.  Gotta love Halloween time, eh?

This is exactly the kind of thing I hate going through.  I don't like haunted houses.  I don't visit them.  But being in one is an entirely different experience - and one that I find wildly entertaining (excepting the lady who was crying, I kind of feel bad for her.).  Plus they feed me every day - which is good because this show is exhausting.  We're there for roughly 6 hours.  We do about 25 shows a night (though I'm double cast, so I only do half of them).  I start on the second floor and end in the basement, so I essentially descend and then ascend 2 flights of stairs twice an hour - which doesn't sound like a lot when you put it that way, but believe me, it's tiring.  I'm beat by the end of the night.  And I smell fantastic.  Especially when they serve garlic bread with dinner.

If you have a chance, come check it out.  We have shows through Nov. 11, but tickets are selling fast.

For those of you that can't make it, just enjoy this picture of some of our fractured family: 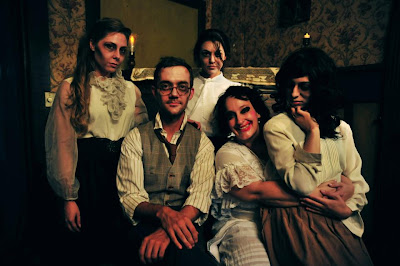 That shirt I'm wearing is Armani!  Swakny, no?